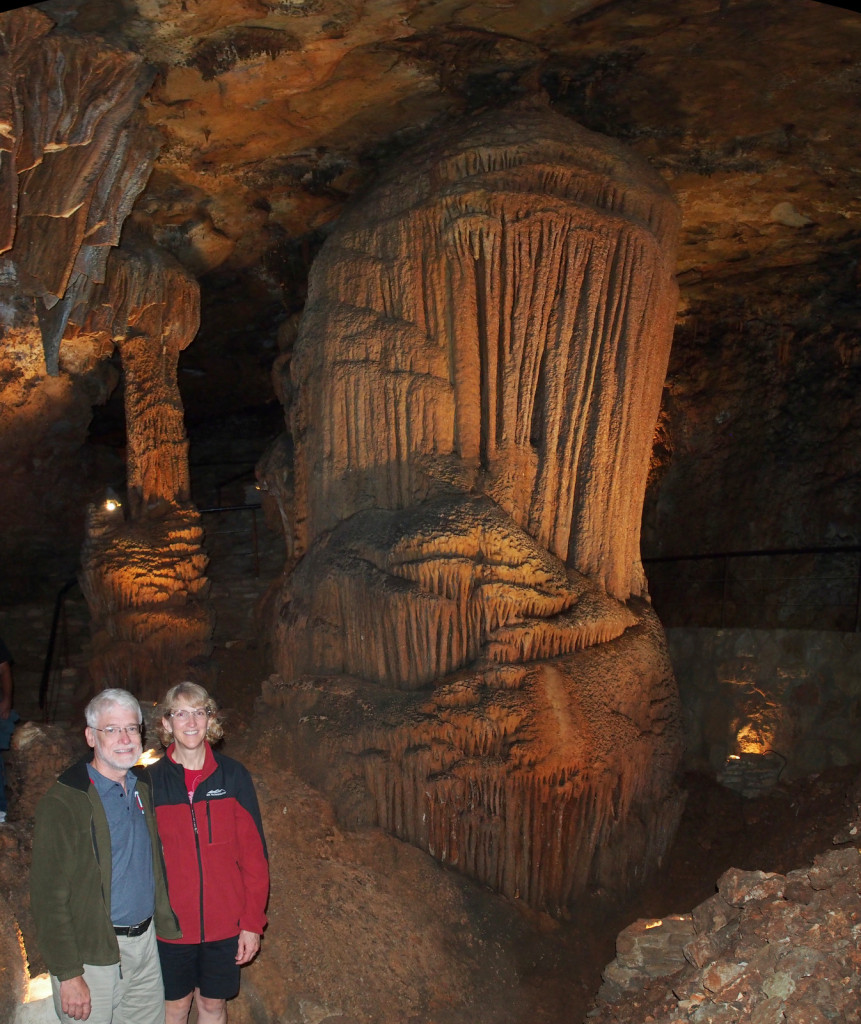 Mom and dad in front of the “pipe organ” at Mystic Cave in Arkansas.  This cave was different than our last cave in that it was more of a “used” cave.  There was black smoke on the formations from when a distillery  was hidden in the cave to make moonshine.  There also used to be a dance floor between formations and they still have Christmas Eve services in the cave with candlelight.

This formation was called the crystal bell. White crystals glisten from it, thus the name. 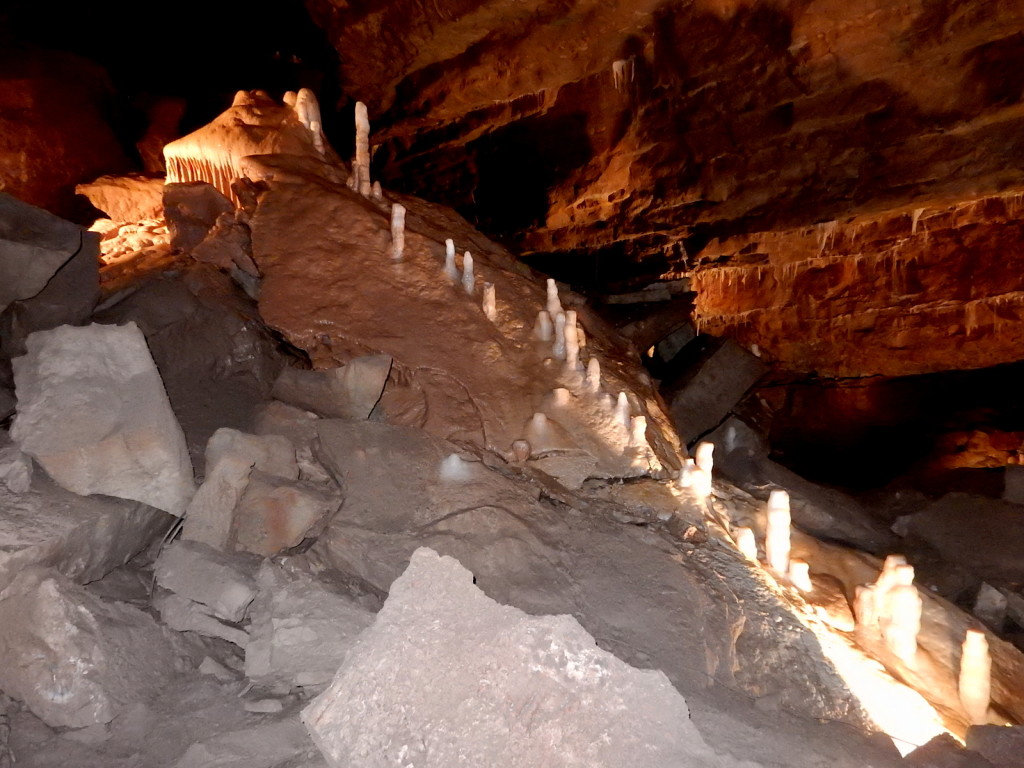 This formation is called the dragon.  The head is in the upper left with the spine and tail trailing down towards the lower right.

Done with the cave, we’re off to have lunch.  A shiny rainbow colored lizard on a tree greeted us at our next stop, Pedestal Rock. 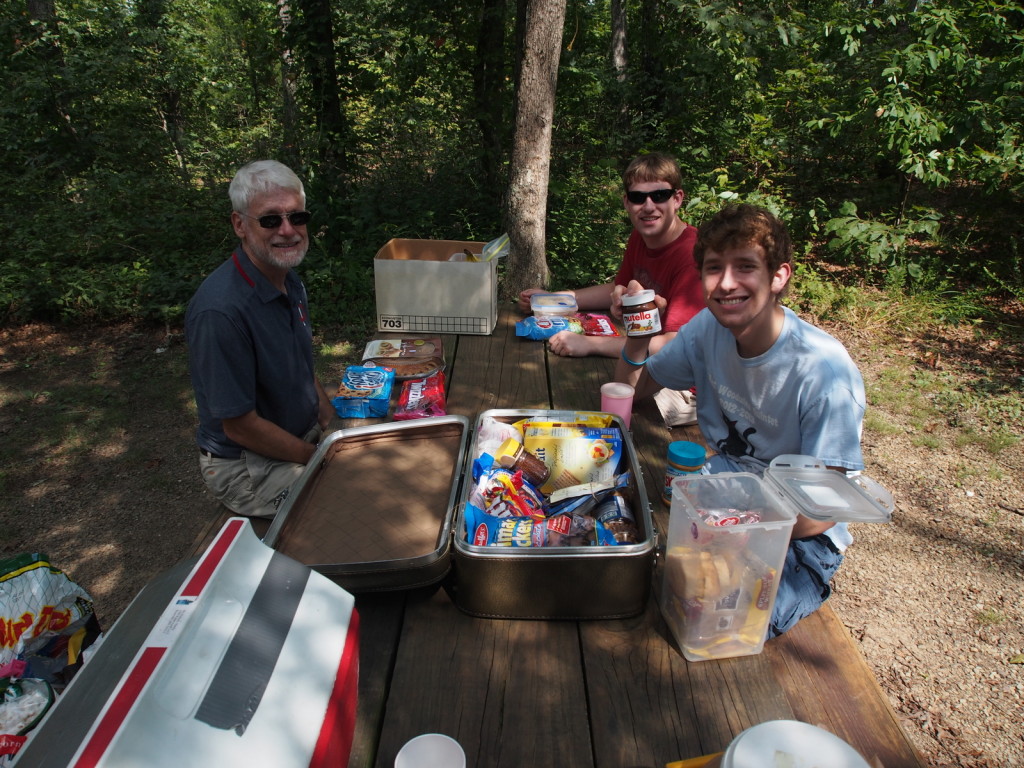 Note what’s for lunch for Dad and Joe!  Twizzlers, cookies and apple danish! 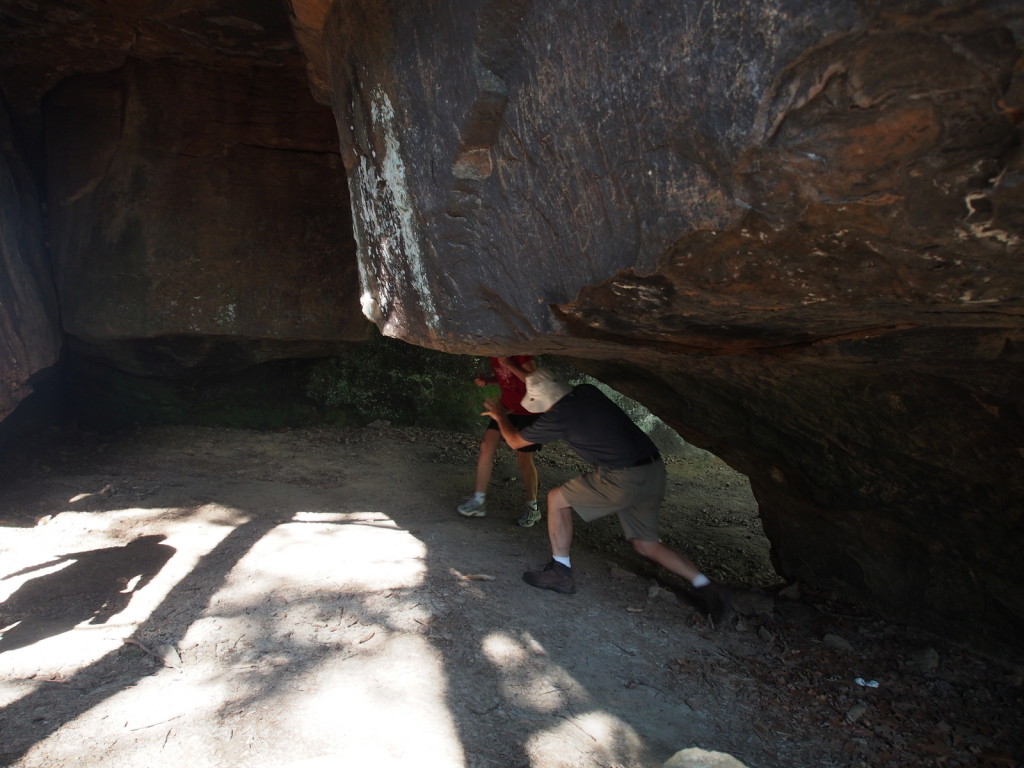 Dad scaring mom! and it worked!!! as it always does!! repeatedly!!! 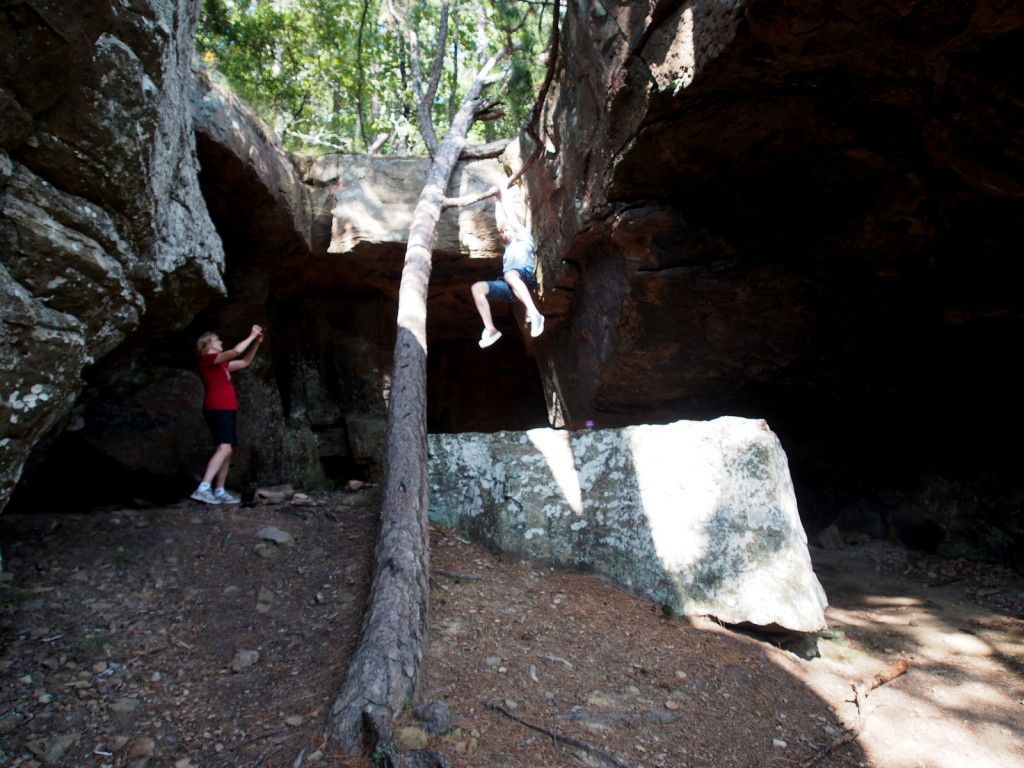 Erik is climbing this tree to reach the top of the ledge.  You’d think Mom would be saying don’t do it, it’s dangerous, but no, she’s taking photos!!  In case he falls, it’s documented! 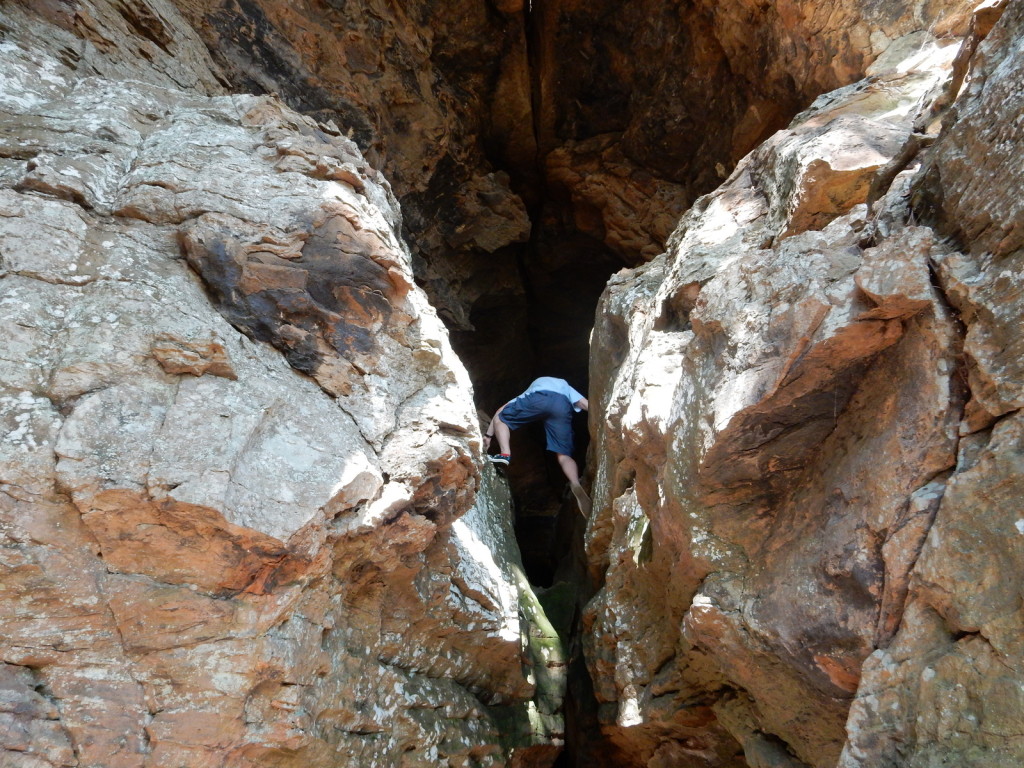 Erik making his way into an unknown cave!  We just watch. 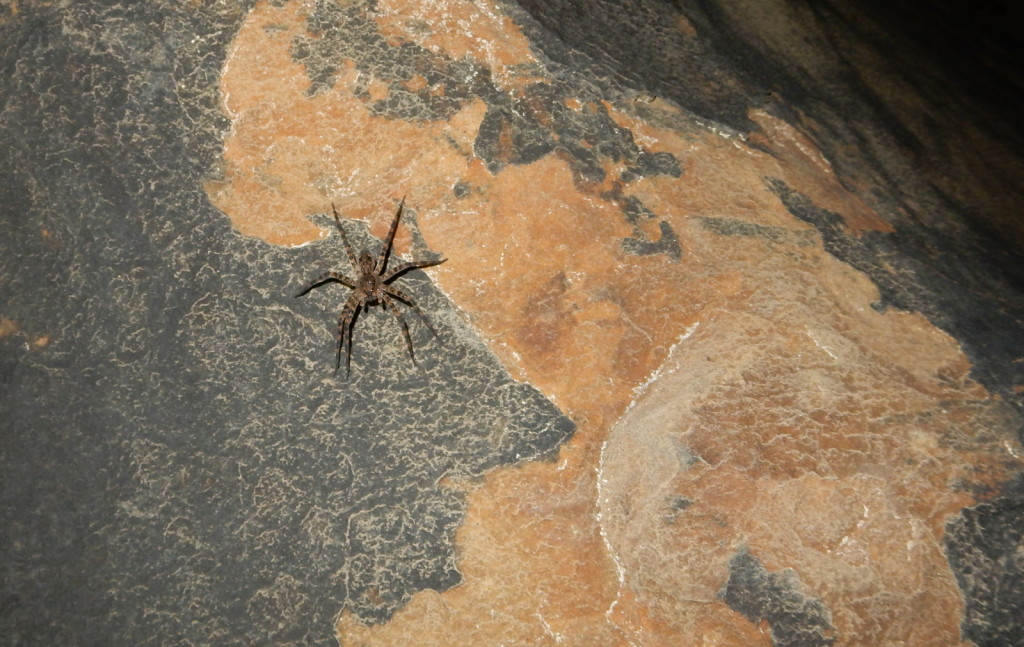 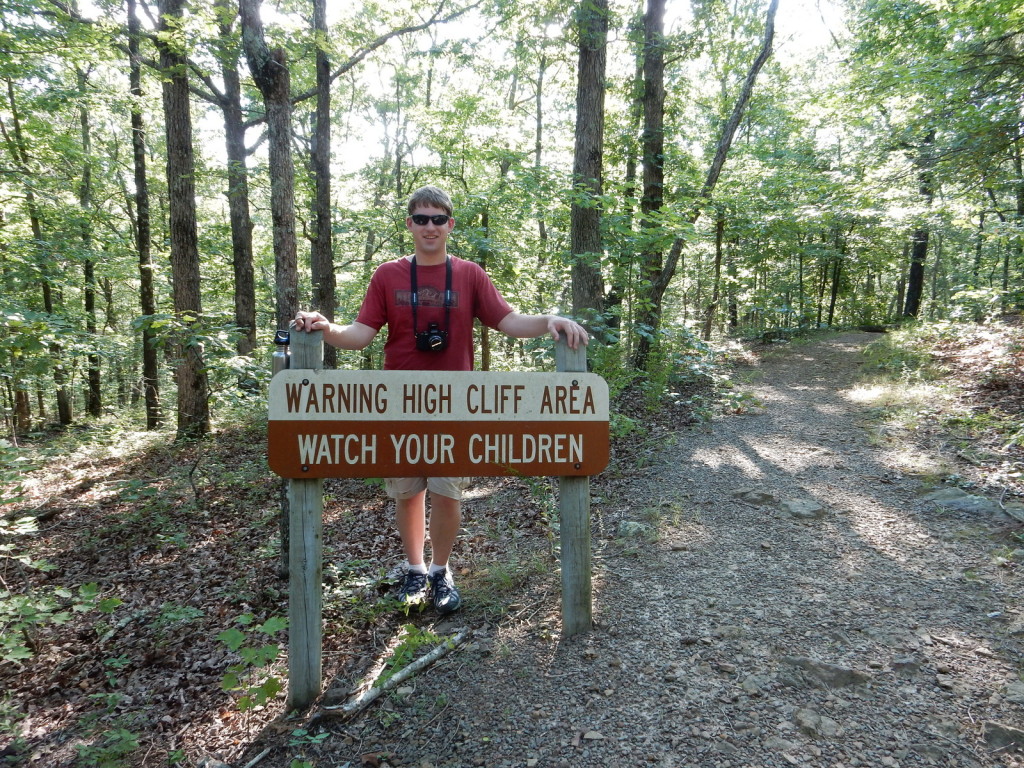 Mom commented that this sign must mean “watch your children do cool things on the high cliffs”!

Next stop.. Hot Springs National Park which is all located in the town of Hot Springs, Arkansas.

The 47 springs are covered to protect water quality.  These provide water for the town, freely available to the public at several water stations.  Many locals visit these stations to fill up jugs for home use. 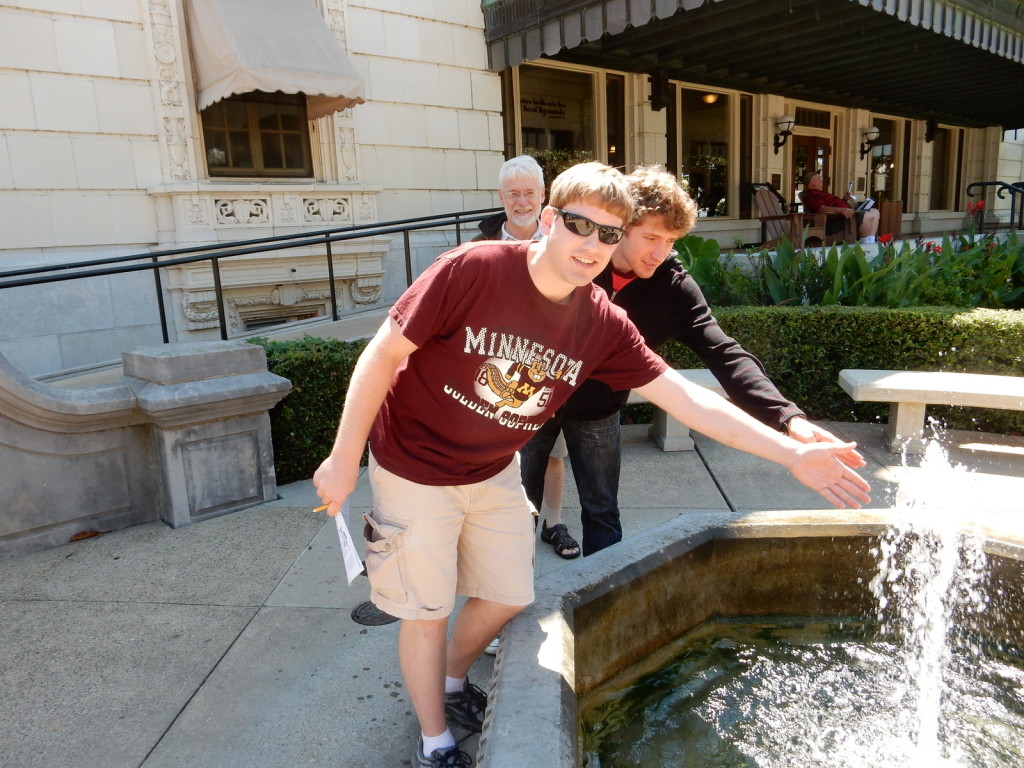 143 degree water emerges from the spring.  This is a bit cooler after having been piped over their fountains, but still very hot! 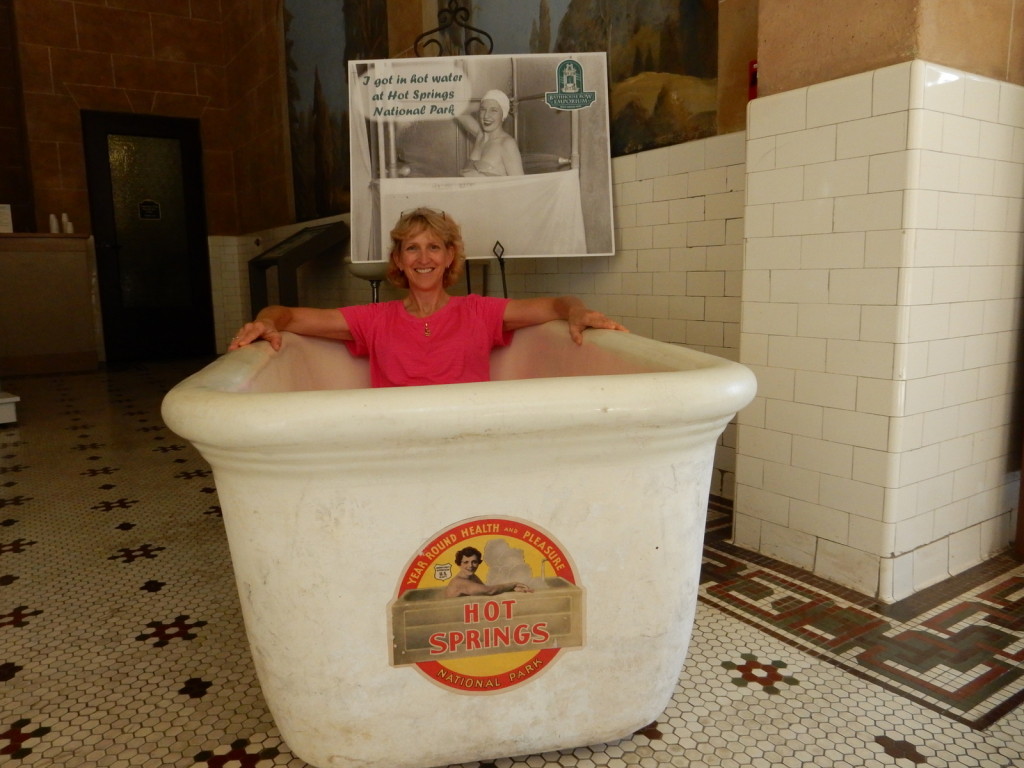 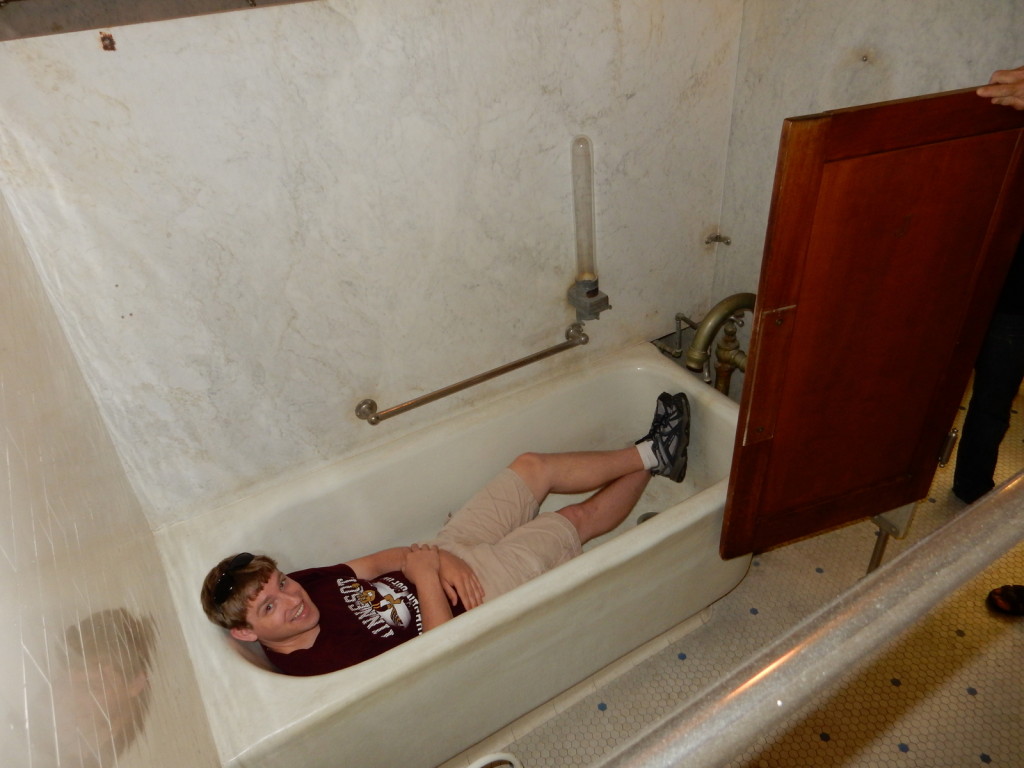 At the Fordyce bathhouse… Hello Joe! 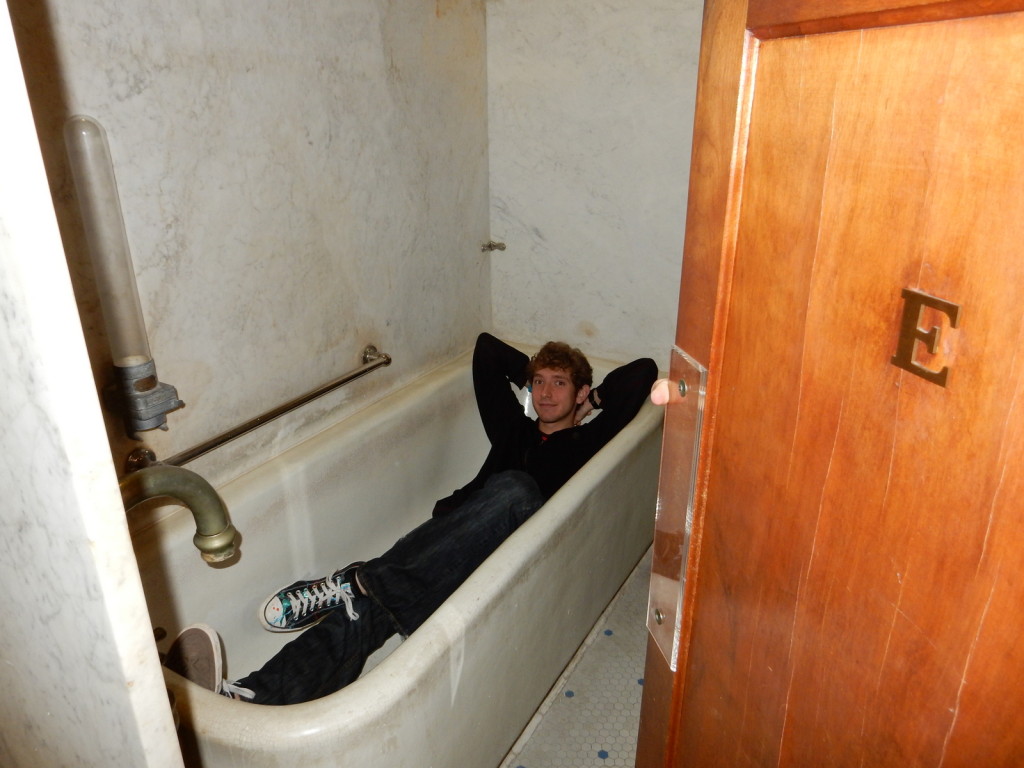 Cleaning up after a hard day’s work. 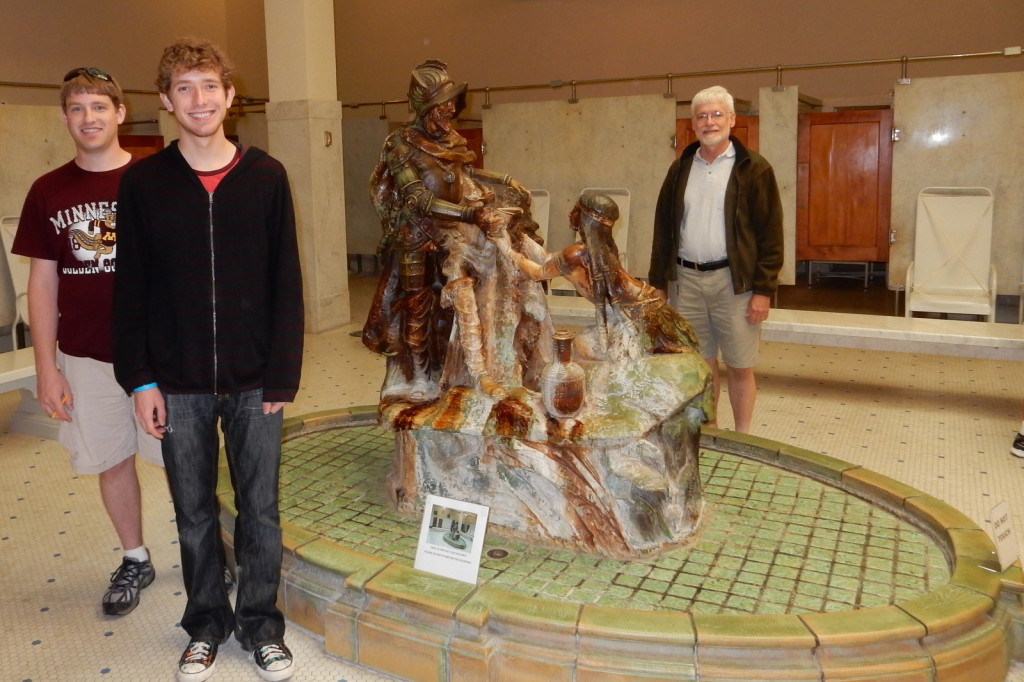 The fountain in the men’s section of the bathhouse. 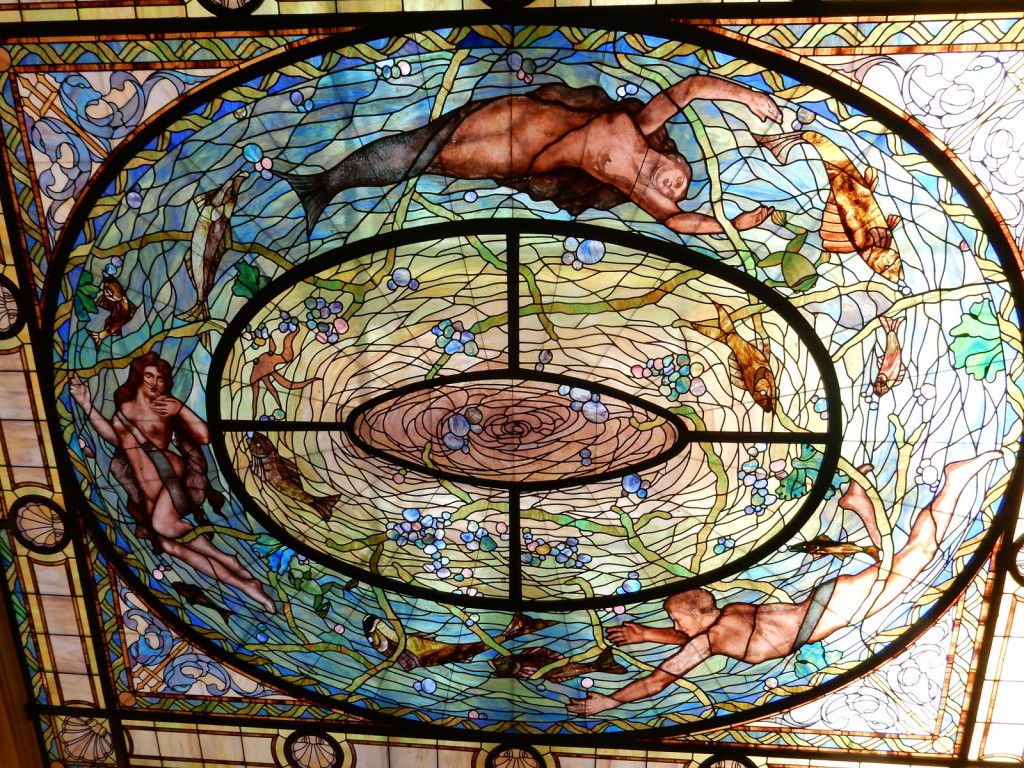 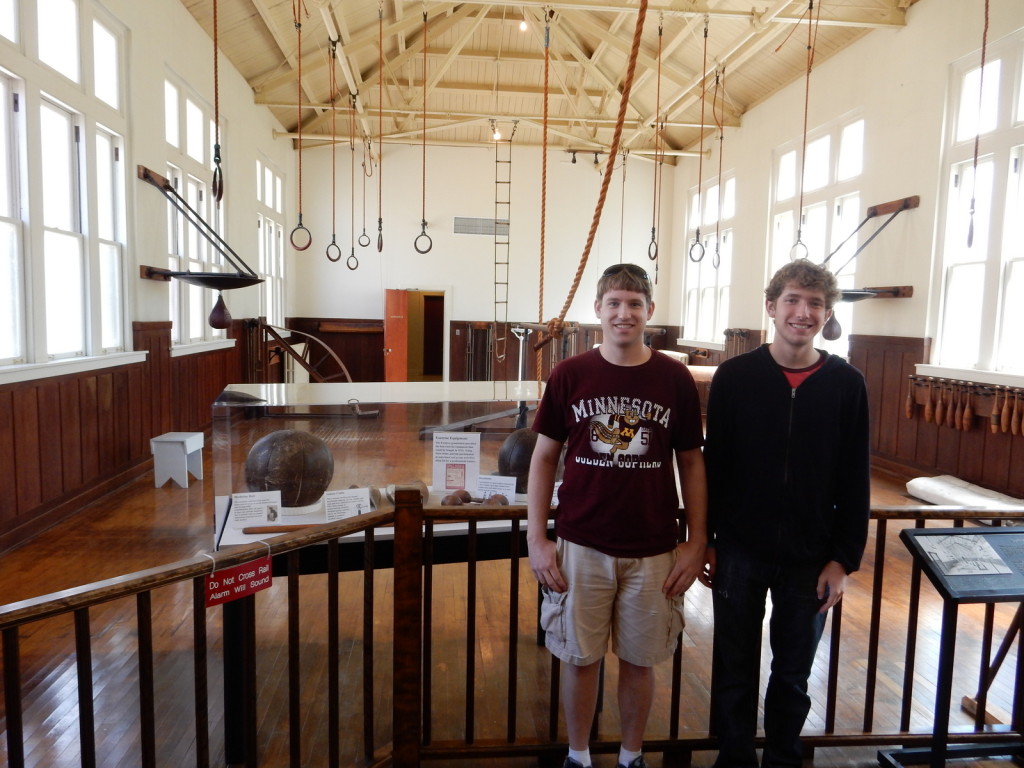 The Fordyce bathhouse even had a nice size gymnasium. 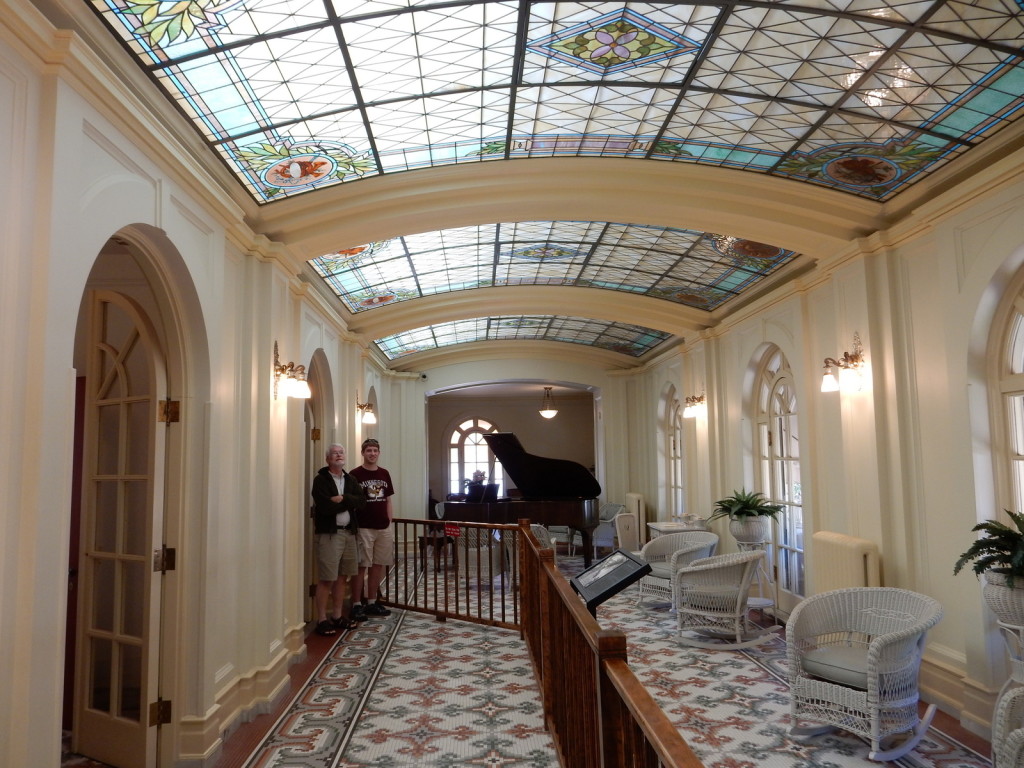 The 3rd floor Assembly Room had a piano, pool table, and lots of stained glass. 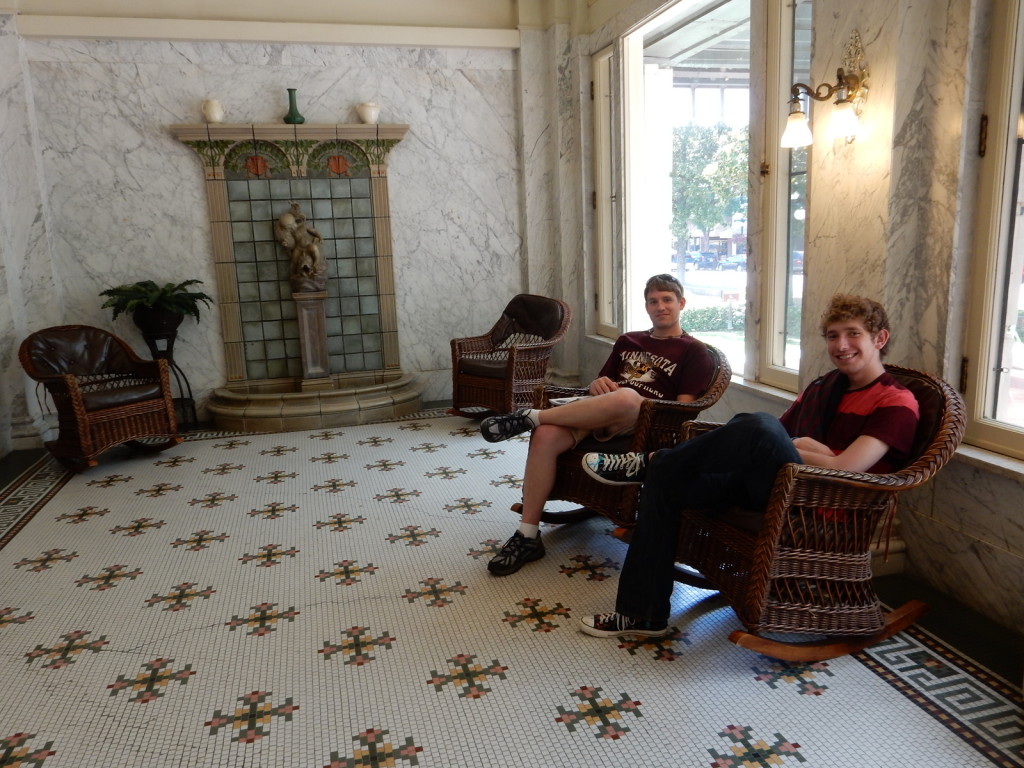 Sitting in the lobby of the Fordyce bathhouse. 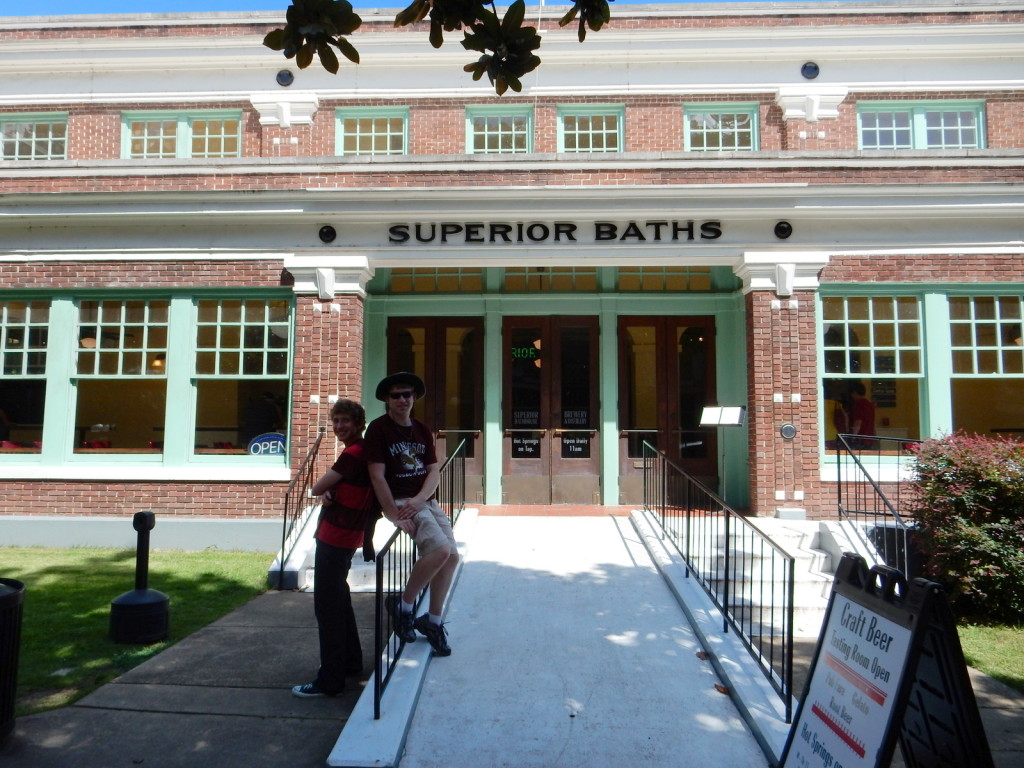 Enjoyed gelato at the Superior Baths.

A now and then shot next to the hot spring behind the Fordyce bathhouse.  The photo on the right was taken in July 1997 when we were down in Arkansas for Paul’s Central States ham radio conference.  We were missing David to get the full replica shot! 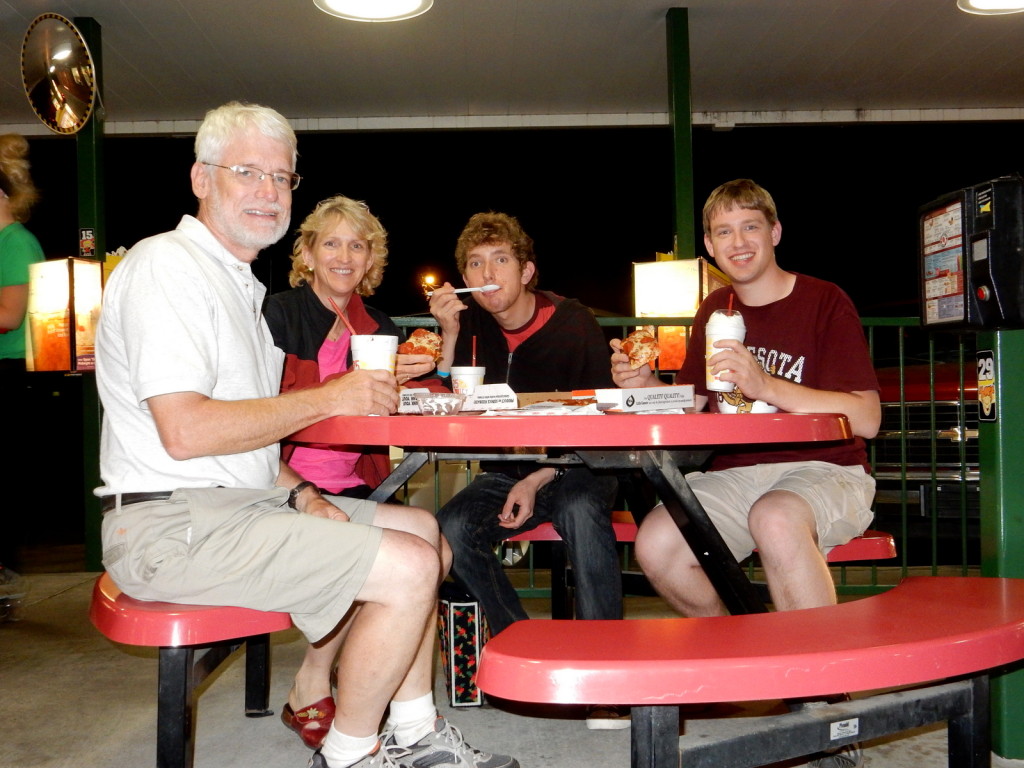 We brought our Little Caesar’s pizza to Sonic for half price shakes.