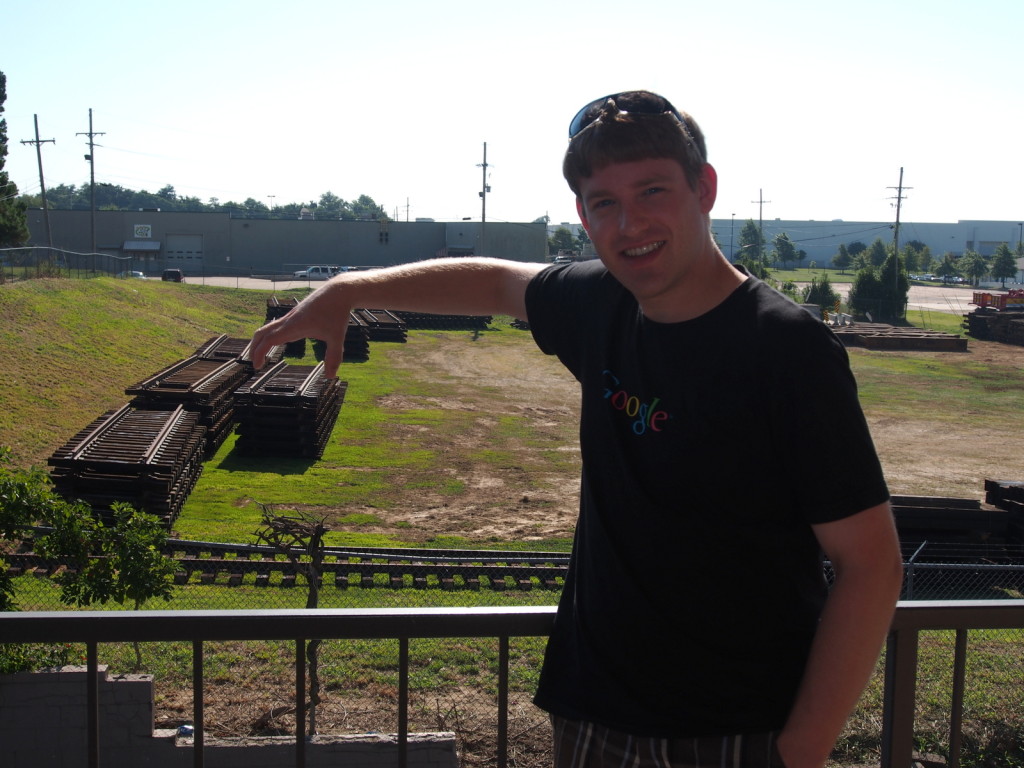 Dad grew up with an American Flyer train set.  As a kid, Joe played with Dad’s train set.  Here it looks like Joe is playing with a model train set outside our hotel.

This cave really is mammoth.  It has over 400 miles of explored and mapped passages in a 7 mile distance above ground, the most in the world.  They discover about 3-4 more miles each year. 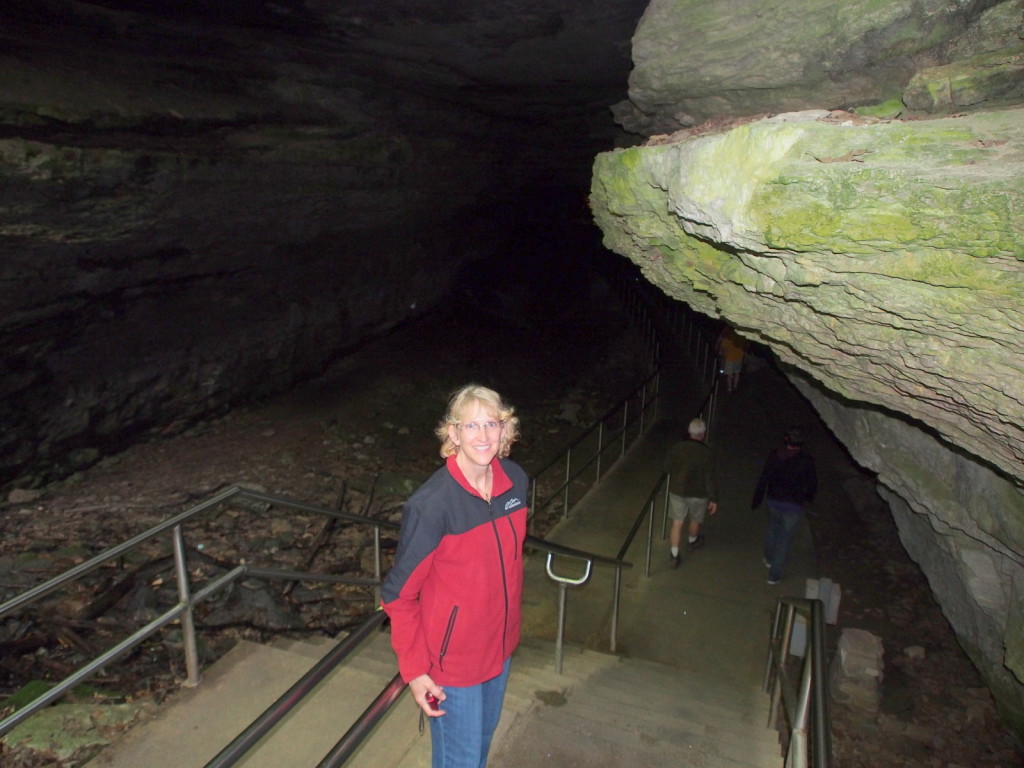 Natural entrance.  There technically are 27 entrance and only a third of them are natural.

During the 1800’s tour guides would allow people to use smoke to write their name on the ceiling of the cave.  You can see some more recent white scratched names.  We saw a “Joe” and had to give Mr. Junior Ranger Joe a hard time!  haha! 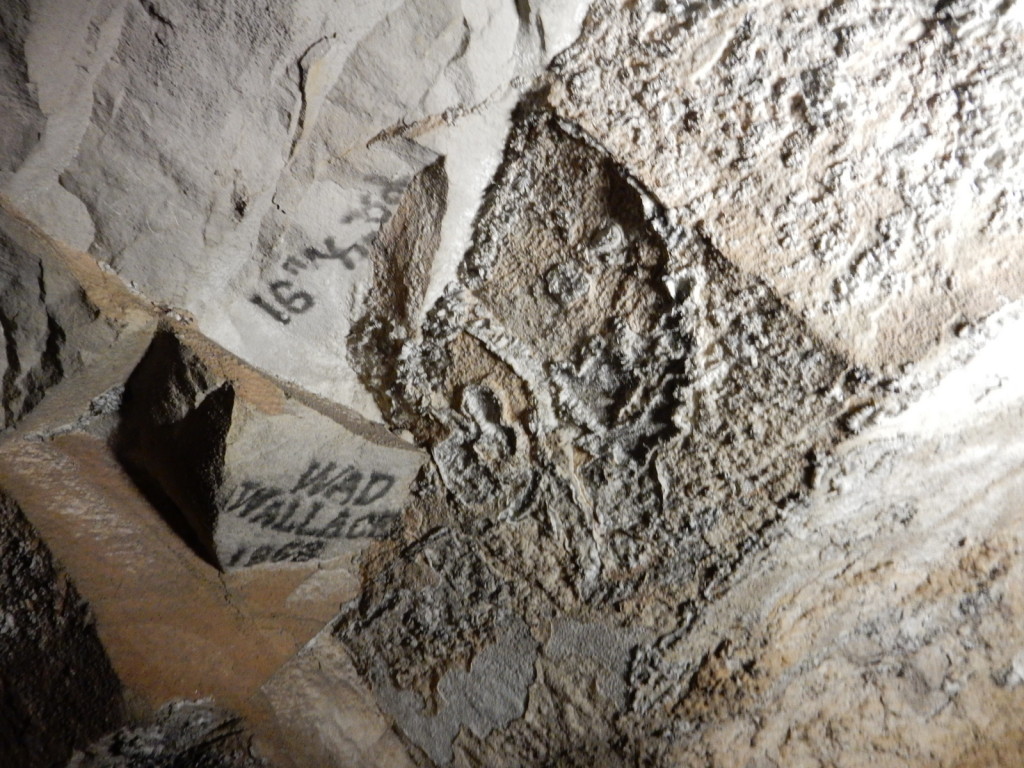 On our 4 hour tour today, the ranger pointed out a union solder, Wad Wallace, who in 1863 wrote his name on the wall.  He would later become a pharmacist. 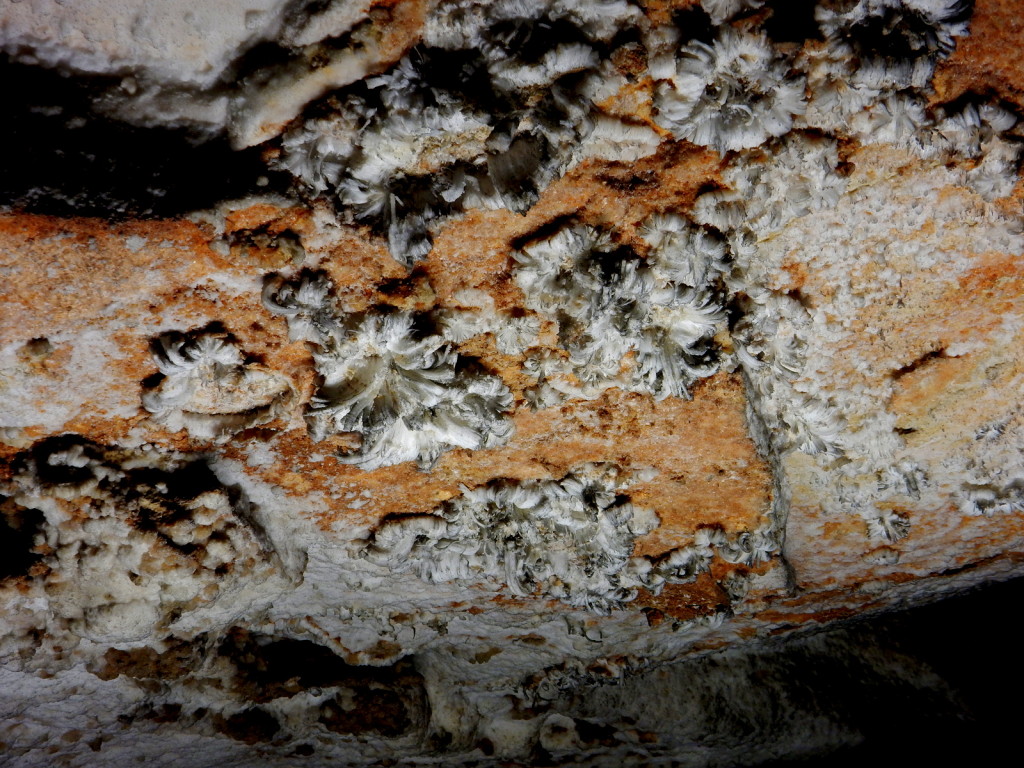 Gypsum flowers on the ceiling.  Gypusm is a widely distributed mineral consisting of hydrous calcium sulfate that is used especially as a soil amendment as well as plaster of paris and as building materials in plaster, board products, and tiles and blocks.  It grows at a rate of about a fingernail width each year!

At a rest stop along our tour.  You can see more names on the cave wall. 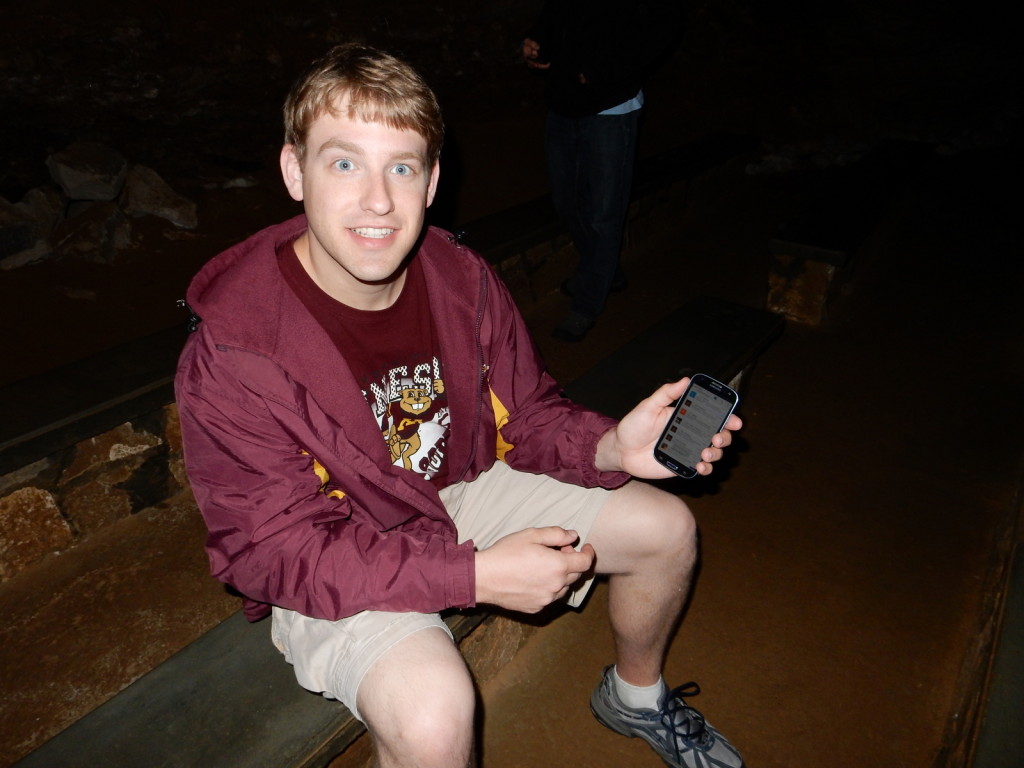 Joe is tricking Mom that he has reception on his phone 300 plus feet underground!  She believed him!  haha!!  No wonder he and Erik couldn’t seem to keep a straight face! 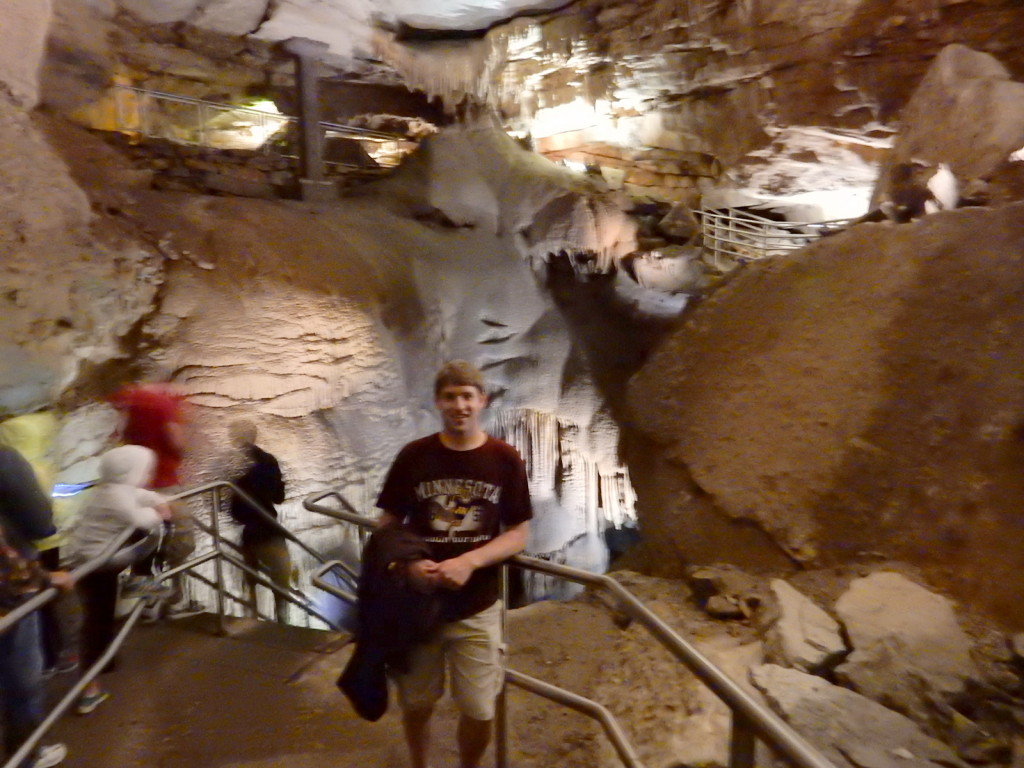 Mammoth cave, because of the sandstone “cap” that is on top of the limestone, is a relatively dry cave and therefore does not have many cave formations in it.  A small area of the cave that is lacking the sandstone cap above the limestone does have water seep in and in this room, called the drapery room, you see beautiful flow stone. 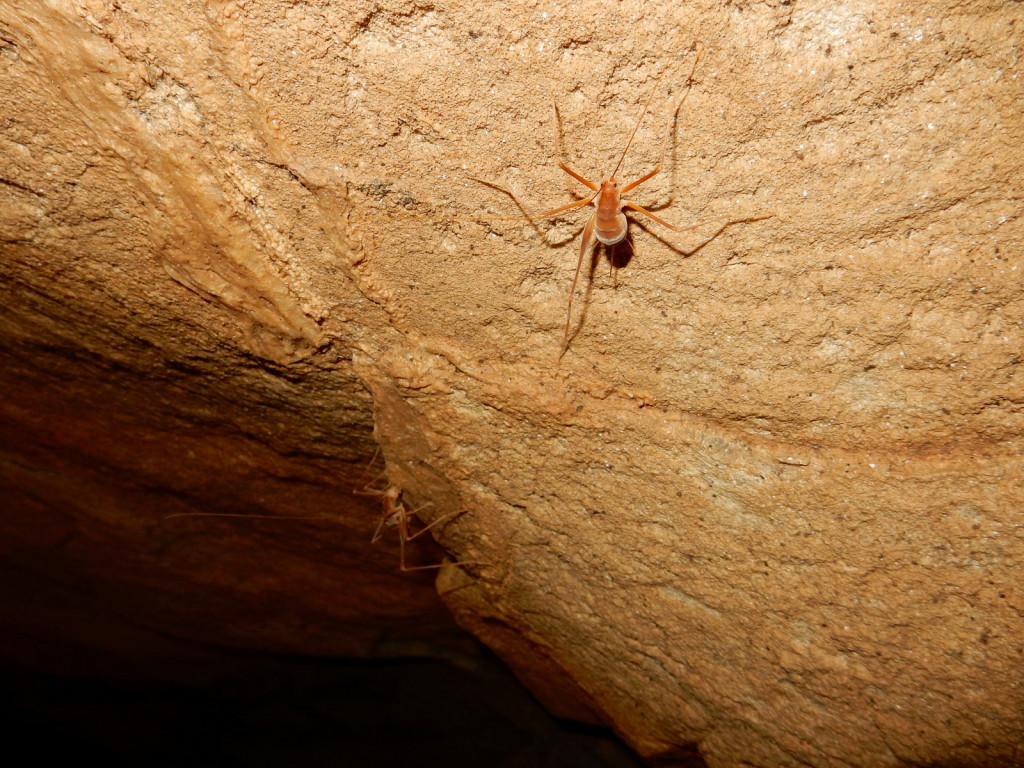 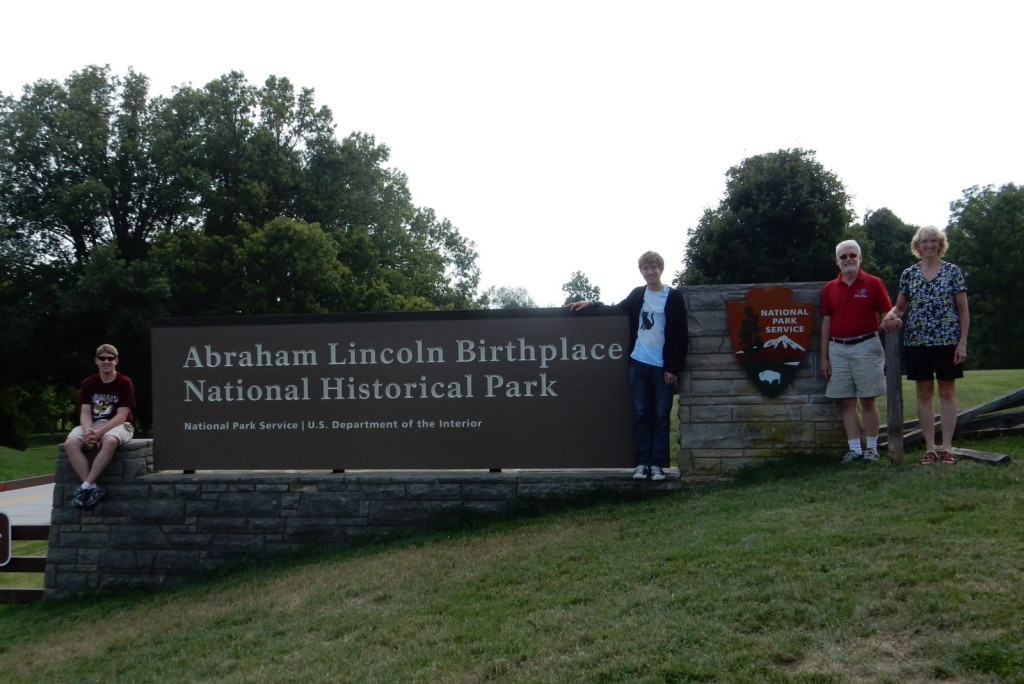 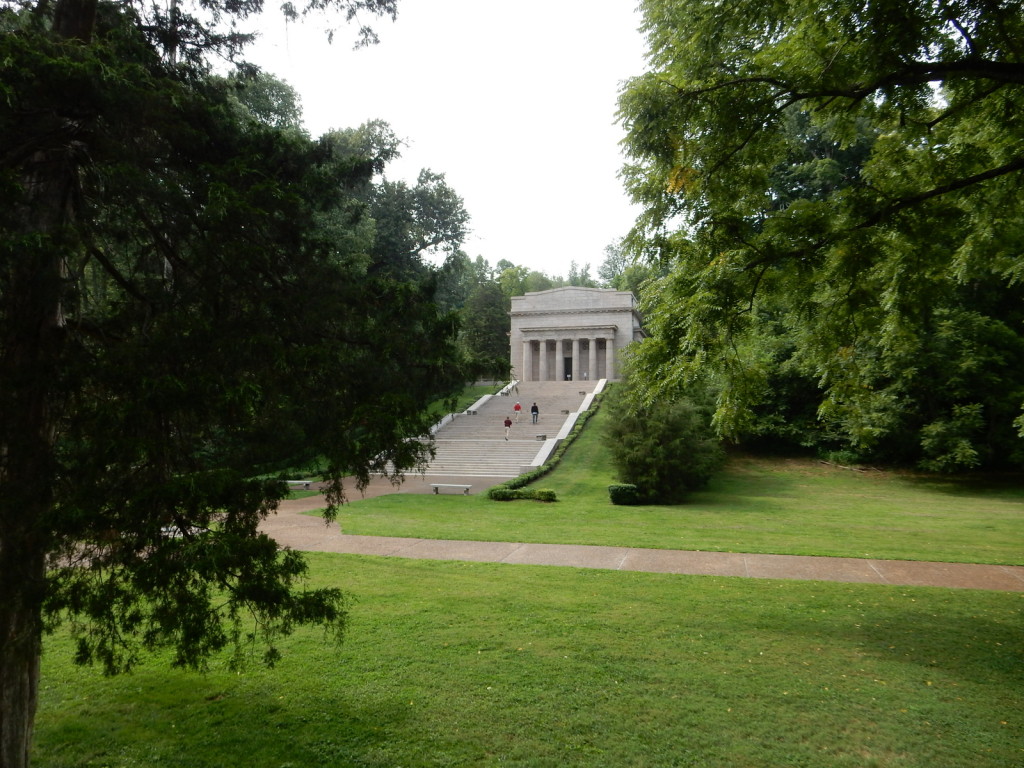 Inside this building is a replica of Lincoln’s log cabin birth home.  There were 56 steps leading up to the memorial for the 56 years he lived.

Wonderful vacation!  I asked Erik what he liked best on this trip and he said exploring and climbing at Pedestal Rock.  Joe said his favorite was Blue Spring where he lost the polarizing filter off the camera and ultimately dove down to retrieve it.  Mom liked the Lincoln Museum which was by far the best interactive and informative museum she’s ever visited.  Dad copied Mom and agreed that the Lincoln museum was great.  Overall though, the best part was spending time with family!  Wish David could have joined us, but maybe next time.