Our first stop on our trip through the upper peninsula of Michigan.

Miner’s Castle.  It was overcast day.  We took in some views of the lake shore.  We had planned to take the ferry you see in this picture for an evening cruise, but unfortunately the weather deteriorated throughout the day, and the captain cancelled the cruise due to 5-7 foot waves on the lake.  Hopefully next time we’ll take the cruise in the fall, have great weather, and enjoy fall colors as well as a beautiful sunset lighting up the rocks like we saw in the gift shop!

Joe and Erik taking it easy!

Family photo, although we’re missing David.  We’ll see him near the end of this trip!

Pretty stripes in the rocks.

Not exactly tropical waters, but pretty water color changes could be seen none the less.

We drove out to Grand Marais.  Not the Minnesota Grand Marais, but they both share the same cold Lake Superior with crashing waves.  This fog horn platform was the destination, but no one wanted to stick around too long, as the weather certainly wasn’t ideal!

The cold air was painful to my ears, and just imagine the pain if the fog horn had gone off too!  Time to head to the car.

Old shipwreck can be seen.

Sea gulls, as annoying as they can be, are always entertaining.

His feathers were a bit ruffled by the wind.

The Mackinac Bridge was completed in the 1950’s.  It is the longest suspension bridge in the western hemisphere, and the third longest in the world.

This stop is also home to the most daring, and in your face sea gulls!  We had some left over food, and he wanted it!

He actually pecked at the glass.

After no luck with food.  He finally flew off.

The little town of Bay View, MI was full of these ornate super sized doll houses.

Our next National Park was just begging for this kind of photo!

Lake Michigan Overlook (aka the “real” dune climb – Erik only) but this was not a designated National Park trail.  They said not to do it.  It was too difficult, but that didn’t stop a lot of people, including Erik.  450 feet elevation change to lake.  Took Erik 1 minute and 22 seconds to get down and 13:38 minutes to get back up.  Under 15 minute round trip!  Way to go Erik!!!!!!

While Erik was climbing up the dune, I took pictures from above.

It was very steep, and often as people would be going down, dust would be kicked up.  He’s going to make it though 🙂 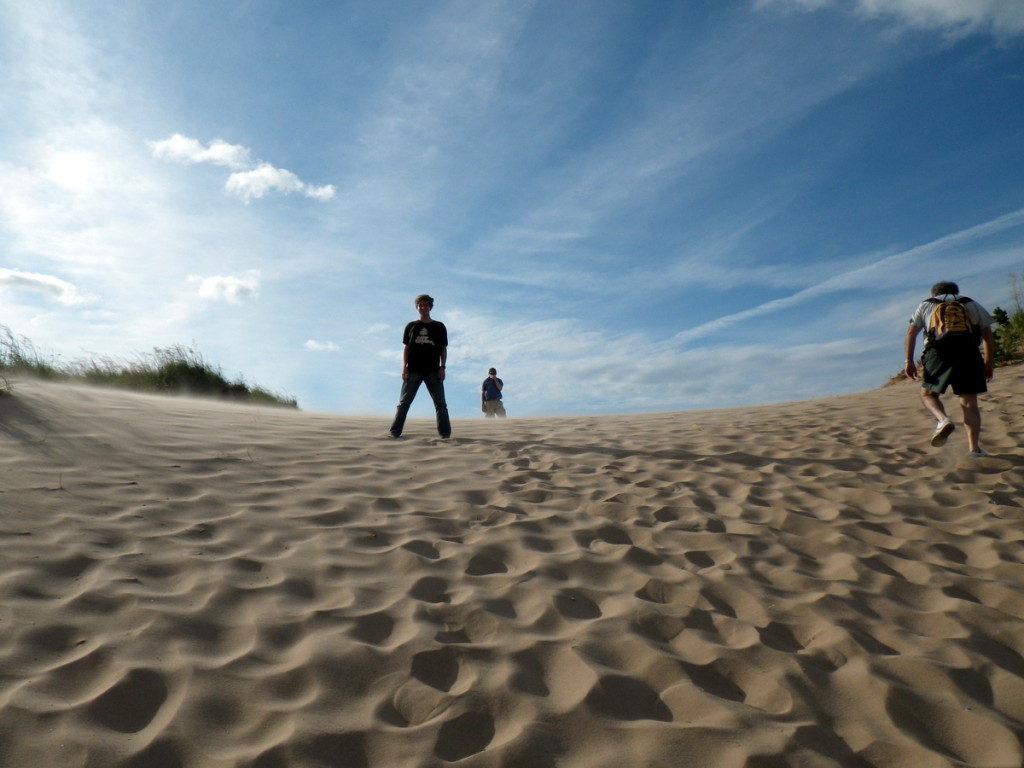 This was the designated National Park dune trail.  We walked the trail about 1/2 way until we saw the lake, and then called it good!  None of us were willing to undergo the feat that Erik had done earlier, descending the dune to get to the lake, only to have to climb back up! 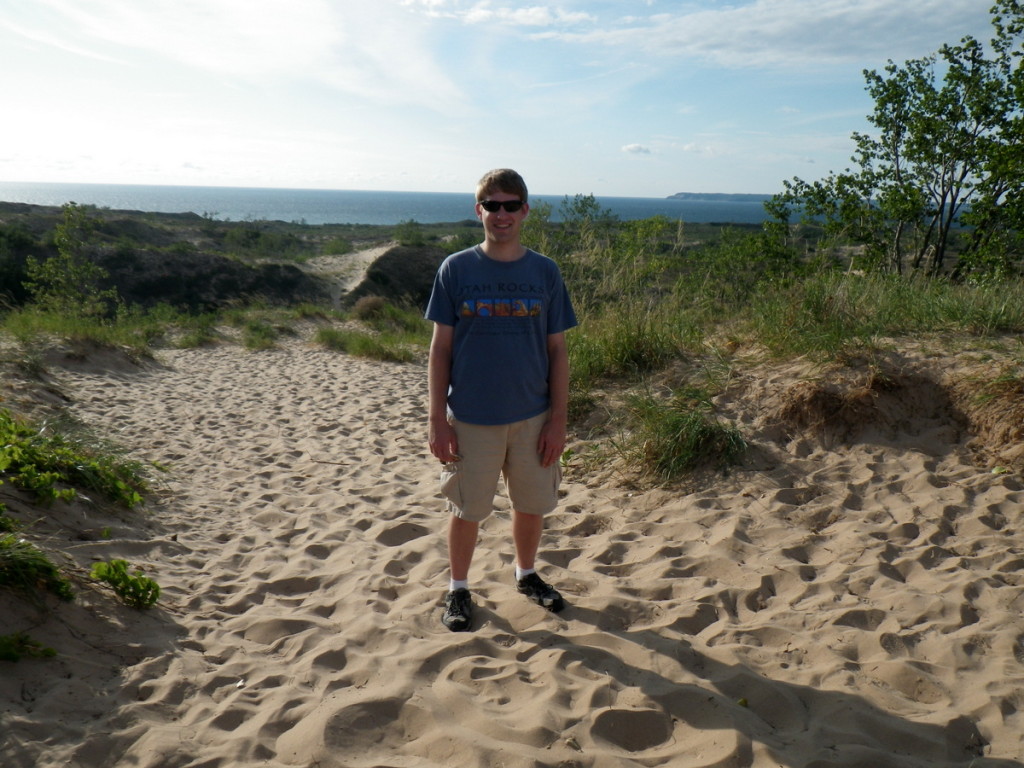 Lake Michigan in the background, along with the sleeping dunes. 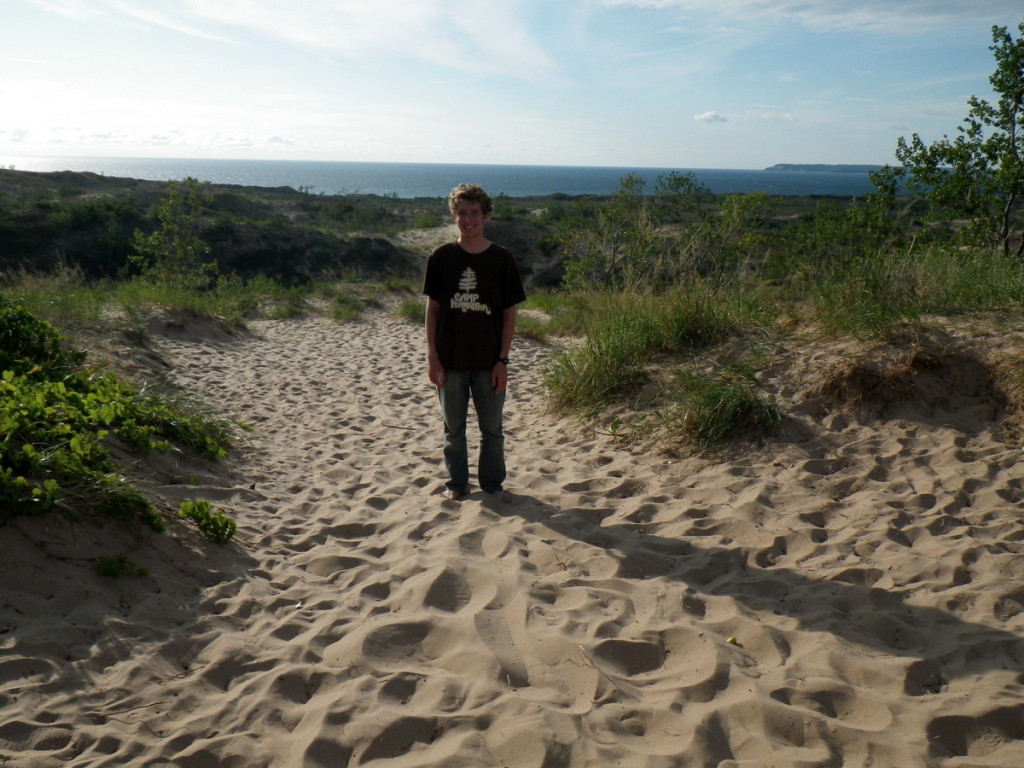 That’s it for Michigan.  Next stop, Cleveland, Ohio.

One thought on “Michigan”